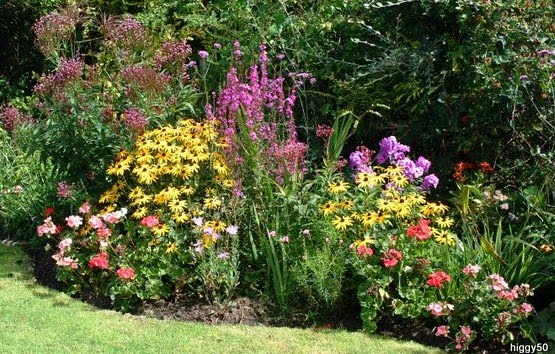 Well hello again and once again it's several weeks since my last post! Apologies for this but as stated on my last two posts it's that busy time of the year which keeps me very busy and limits opportunities to get on the computer somewhat.

Without further ado lets crack on and get straight into this post and update you on much of the work started, completed and not yet completed in Higgy's garden...

Last post I left you when we were right in the middle of that difficult area behind the pond which didn't really offer much other than some empty space once all the brambles and old fence had been cleared. If you browse back through the previous post we had completed construction of a raised bed walkway with plum coloured slate path. Obviously the next job for me was to fill the raised beds with soil ready for planting, my chosen mix for these beds was easy and consisted of roughly :-


My planting plan for these raised beds is to try and grow some very large and 'lush' types of plants to give a 'jungle/tropical' feel as you walked through the area and past the beds with the idea being that once grown the plants would be stood tall in the beds increasing the appearance of size and creating a dramatic atmosphere...(that's the madness behind my plans/thoughts anyway!!)

Although this project still isn't quite finished and is a couple of seasons away from it's planned 'drama' here it is in pictures for you.... 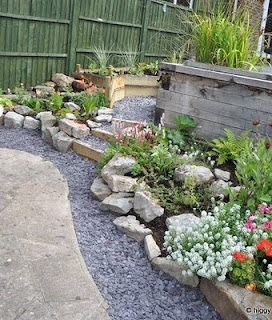 In this picture above you can see that this area sits nicely behind the raised sleeper koi pond and the steps lead you up from the feature rockery into this area, I used the plum slate to give a nice flow from the raised bed area down into the rockery/seating area. 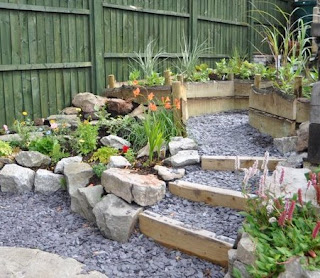 Here are the steps which lead you up and make you want to explore a little further. This is the view you get from the seating area which should be quite dramatic once the plants have filled out and reached their full potential. 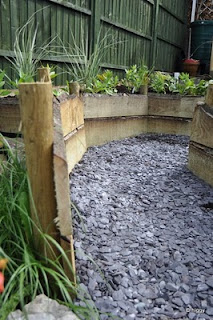 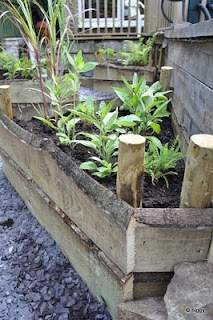 A couple more views (above) which again just need the plants to fill out....planting so far has consisted of several large grasses which should reach up to 1.5-2mtrs tall, a Fatsia Japonica which will form a a large bush with big leaves. To keep the 'tropical' look I have also planted an old cordyline which was doing nothing in an old pot and to get a little colour and some extra plants for this year some rudbekias which were sitting around in my cold frame looking sorry for themselves! 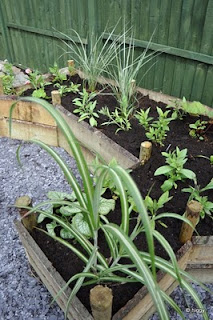 Also added since these pictures were taken is a rodgersia which has lovely large rough leaves and a lovely scent when in flower and  a few more green/foliage plants for both height and ground cover. 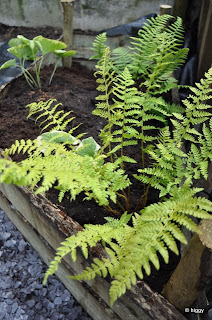 At the top of this area will be a sunken deck with ferns (above) and hostas in as this will be shady which will provide ideal conditions for them and add some lush green foliage to keep the 'jungle' theme going and make a great experience being sat down in amongst all the plants. 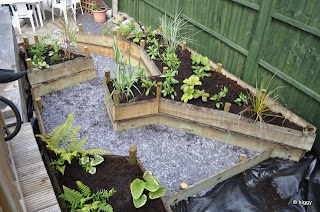 This last picture gives a bit of an overview and I hope you can see where the deck will be and get an idea of how it will look once completed and all the plants have grown up?
That's about as far as I have got with this area at the moment due to my 'garden project' budget having been  just about depleted now!!....I have however now managed to source some old hardwood deck boards and framework off of a work colleagues mum which should enable me to get this finished during the next few weeks!!
Ok so what else have I been up to if that wasn't enough?.....well I have to say lots!!.....and the garden is really looking good at the moment with August being a great time with so many of my planting schemes reaching their peak during this month. I intend to take some more pictures and in my next post share some of the planting with you in more detail when I have a bit more time and space to show you.
For now I want to quickly show you a little 'unplanned' project which I completed over a weekend for my daughter recently. Now with her fourth birthday closely approaching and the plan to have a 'garden' party for her and all her friends good 'old Dad' went to work to give them a play area to enjoy, as all of her play equipment had been gradually getting pushed further and further into the hedge row!!.... 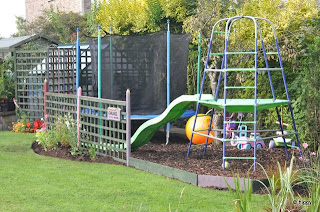 Here is the new play area which sits nicely behind the new greenhouse enclosure. The area was cleared and then I used a weed membrane and finished with a good thick covering of play bark which needs to be to a depth of about 8 inches. 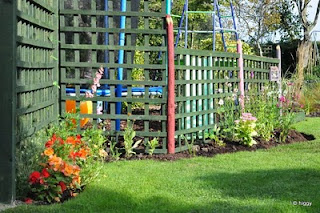 The trellis panels were secured into place using fencing stakes which I then rounded the top and painted them to look like giant pencils to add a bit of fun and interest for my daughter. 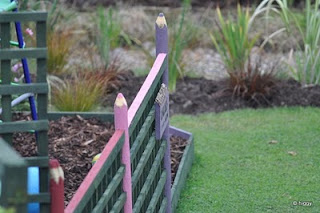 The planting scheme in the bed at the front of the trellis is chosen by my daughter who wanted "pink!"  I did add a little white in as a contrast!! 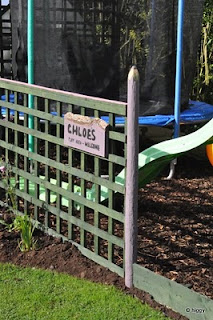 Finally a sign was added to give her a sense of 'her space' and to welcome her friends into the play area....
Well there you have it a quick and easy play area knocked up in a weekend.....simple!!....and of course you all want to know how did the garden party go????......It rained all day and we had an inside party!!!!LOL!!
That's about it for now other than to show you a picture of a visitor who I have seen twice this week in the fields at the bottom of the garden..... 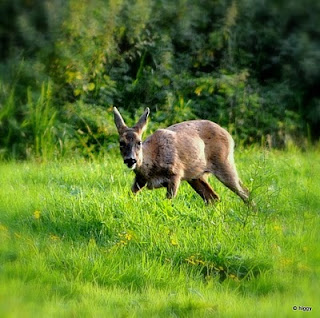 Yes we do have a lone deer who seems to be in the area at the moment and thankfully she is staying out of the garden as I know they have potential to do a lot of damage! But what a great sight from your kitchen window isn't it!? 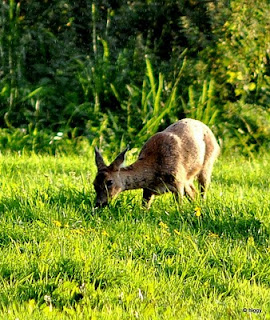 (I have to confess that although taken across the fields near our house by myself, this isn't the 'actual' deer I've seen which I have yet been able to get a decent picture of!)
I think that's about it for now, next time we will look at some re-design and new planting near the old stone bridge and have a general overview of where the garden is now and how it has looked during the summer of 2011.
As always please feel free to comment as I am always keen for feed back whether positive or developmental....
Cheers
Higgy
Posted by Higgy at 5:05 AM No comments: 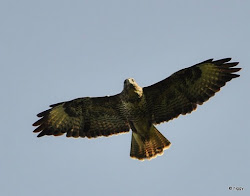 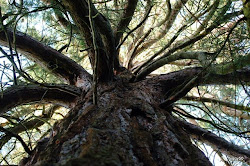 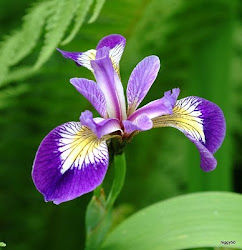 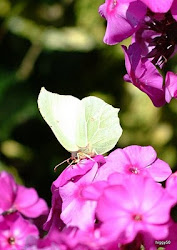 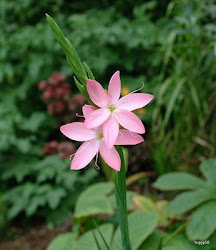 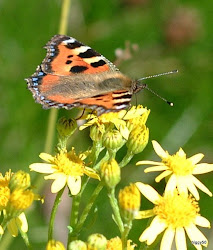 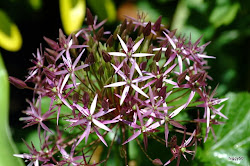 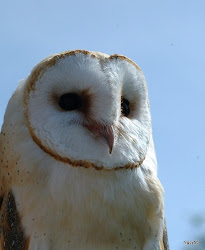